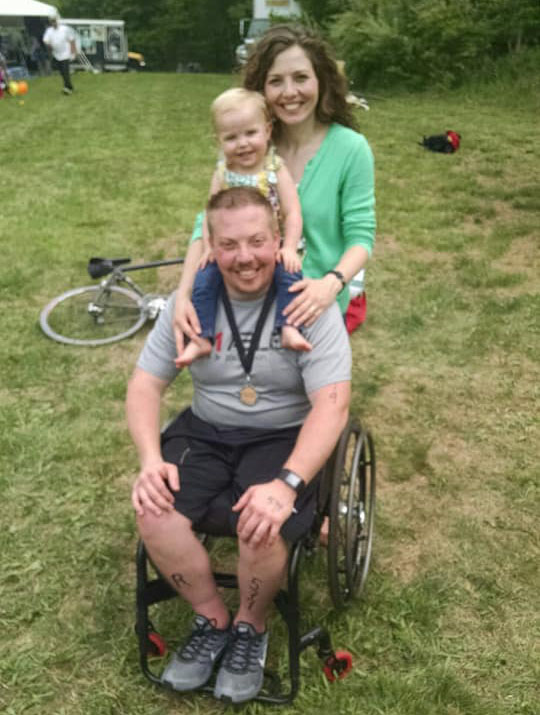 We pray our sights be straight and our aim be true.

We pray for no pain to the game we pursue.

We thank the Lord for this land.

We thank you for the sights from our stand.

We pray for safety one and all.

We pray we may return next fall

Chris Saunders was 30 years old and hunting with his dad when his life changed forever. “I was up in the tree stand and the whole fricking tree fell. It’s not like the stand broke. It all landed on top of me. Thankfully my dad heard the noise because I couldn’t yell for help. The impact broke my sternum, ribs, and T-11 [vertebrae].  I was messed up.”

Imagine that for a second. You’re doing something you’ve done since you were a kid, something people have done forever. Hunting is not without risk, of course, and smart hunters plan for most of them. But trees your father set stands up in when he was a kid aren’t supposed to be one of those risks. Imagine the terror as a parent, hearing a tree fall while you’re deep in the woods with your son. You can’t see him and as you’re hurrying in the direction of the sound, you’re thinking about how many trees there are in the forest, the small chance that it’s one of trees near him. You pray he’s safe but find him severely injured and trapped under a tree you can’t move. Imagine the helplessness of waiting for help to arrive.

“Dad called 911 and they were able to get to me with the jaws of life to cut the tree stand that was bent around me. I remember discomfort. I was asking for pain meds a lot.  Dad followed me to the hospital. I vividly remember the doctor saying that this was a game-changer. At that point, my wife Sheena was three months pregnant with our first child, Molly. I’m lucky that our family is resilient enough. I know the statistics and these things often end in divorce.”

Everything changed that day for Chris and his growing family. He was in rehab and dealing with the reality that he would be in a chair for the rest of his life. At the time, they lived in a four-story house. Chris had a wheelchair on each level and installed two stair lifts. They wanted to move, but the time wasn’t right so they made it work. He was able to put on a positive face, in public anyway. “We’re in a good place now, but it was rough for a while, a lot of bad things said. I’d sit there in front of the TV drinking beer. I was angry thinking about how I couldn’t do anything anymore. I felt trapped and was very frustrated.  My psychologist helped me to get over it. He helped me to understand that Sheena was picking up a lot of the slack and to appreciate what it was like for her.”

Chris’s cousin told him that he had to go and meet Chris Kaag at IM ABLE Foundation and he held onto his card for weeks without acting on it. “I remember I was in Home Depot and Chris (Kaag) came up to me and told me to follow him back to the gym so he could show me around. I’m following him thinking ‘I’m not ready for this yet.’ I mean, I’m still trying to figure stuff out, you know? I’m working on the basics like income and even how to use the bathroom and this guy’s intense. That night, I talked to Sheena. At that point, Molly was only a month old but she encouraged me to go. She wanted me to meet other people like me.”

Chris did start coming to IM ABLE regularly. There was a small group that exercised together. “It was a cool little community.” Chris found that by listening to what other people were going through helped him to realize that other people had it bad too, some had it worse. He didn’t have the excuses he thought he did.

The next fall, not even a year after the accident, Chris participated in his first Duathlon. He borrowed a bike from IM ABLE. “I didn’t set any records or anything, but it felt good. I was a part of a group that was helping other people, helping each other.”

Through the IM ABLE grant program, Chris received an adaptive bike. “The year I got it, I put over 1,000 miles on it. Being disabled is super expensive and not a choice. You guys can run to Target, buy a bike and it’s ready right away. Some of my adaptive equipment is worth more than my car.”

“IM ABLE has helped me and my family a lot. Without the IM ABLE friends and family, I’d be a different person. You see a bunch of people with disabilities who don’t have this and they don’t have the confidence we have. It’s more than the bike. It’s the idea of it and the community behind it,” said Chris who began giving back after he received his grant. IM ABLE visits schools in the area to work with adaptive students. Chris volunteered to join Chris (Kaag) at a Wilson track and field day. “There was this girl who was in 4th grade and she was blind. She’d never been on a bike before we brought one she could ride. Watching the look of happiness on her face as she rode for the first time was awesome. She was doing something for the first time that her friends had been experiencing for years. That’s what it’s all about.”

One thought on “IMPACT – The Saunders Family”