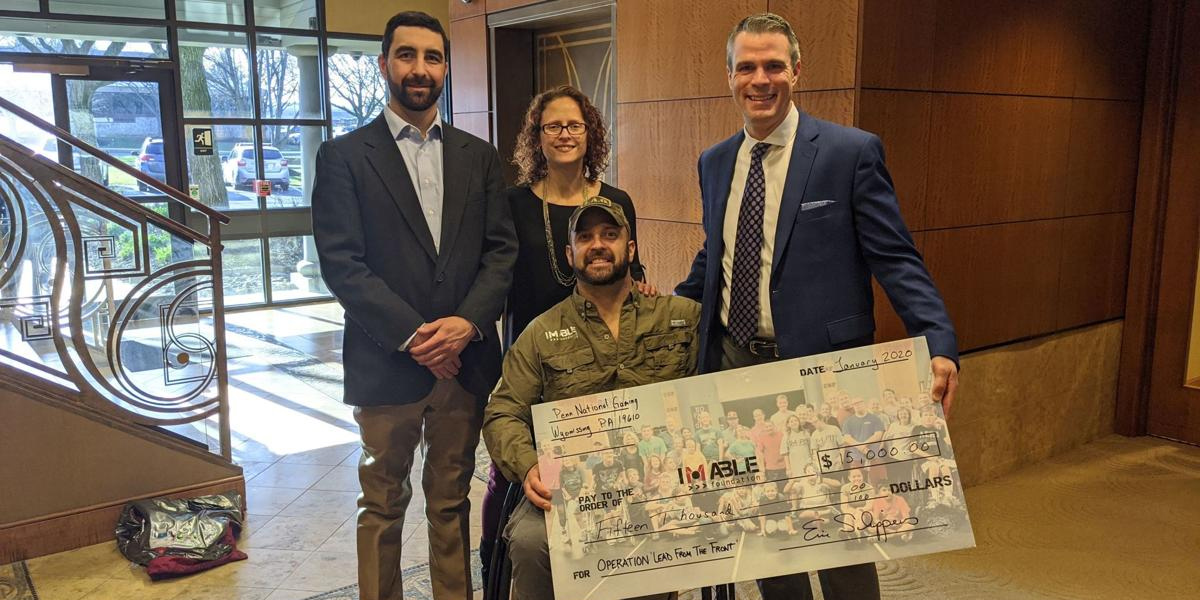 A new program launched by the IM ABLE Foundation is getting off to a strong start, thanks in part to a donation from Penn National Gaming.

The Wyomissing-based company has donated $15,000 to IM ABLE’s “Operation Lead from the Front” initiative.

The program matches veteran mentors with children with disabilities.

“We ran a pilot for the program in 2019 and it was as successful as we had hoped,” said Chris Kaag, a Marine veteran who founded the foundation in 2007. “My goal with this program is to give other veterans a new mission and get these kids more active. The added benefit here is the kids get to learn life lessons from those who have served.”

Another Marine veteran, Alan Coderre, took part in the pilot program, being partnered with Robert, a young man with cerebral palsy.

“Robert’s stronger than I am. He wants to be the hardest working man in the room,” Coderre said. “My wife says I’m in such a better mood after working out with Robert. I tell Robert he’s not allowed to call it a disability; it’s a gift.”

Penn National said it has been proud to back IM ABLE’s efforts to help those with disabilities over the years, and the company sees the potential for the new program having a huge impact on both veterans and the kids who participate.

“Whether disabled or able-bodied, we all have challenges,” said Eric Schippers, Penn National’s senior vice president of public affairs. “But athletes of all abilities can celebrate grit, grind, struggle, perseverance, determination, and accomplishment.”

Kaag, who serves as IM ABLE’s executive director, founded the foundation after being diagnosed with adrenomyeloneuropathy (AMN), a rare degenerative condition, while serving as a Marine. He was 21 at the time.

“My physical ability declined rapidly and I will be in a wheelchair for the rest of my life,” Kaag said. “I could have given up. Instead, it motivated me to assist other individuals with disabilities. I started the IM ABLE Foundation in 2007. It gave me a new purpose, a new mission.”