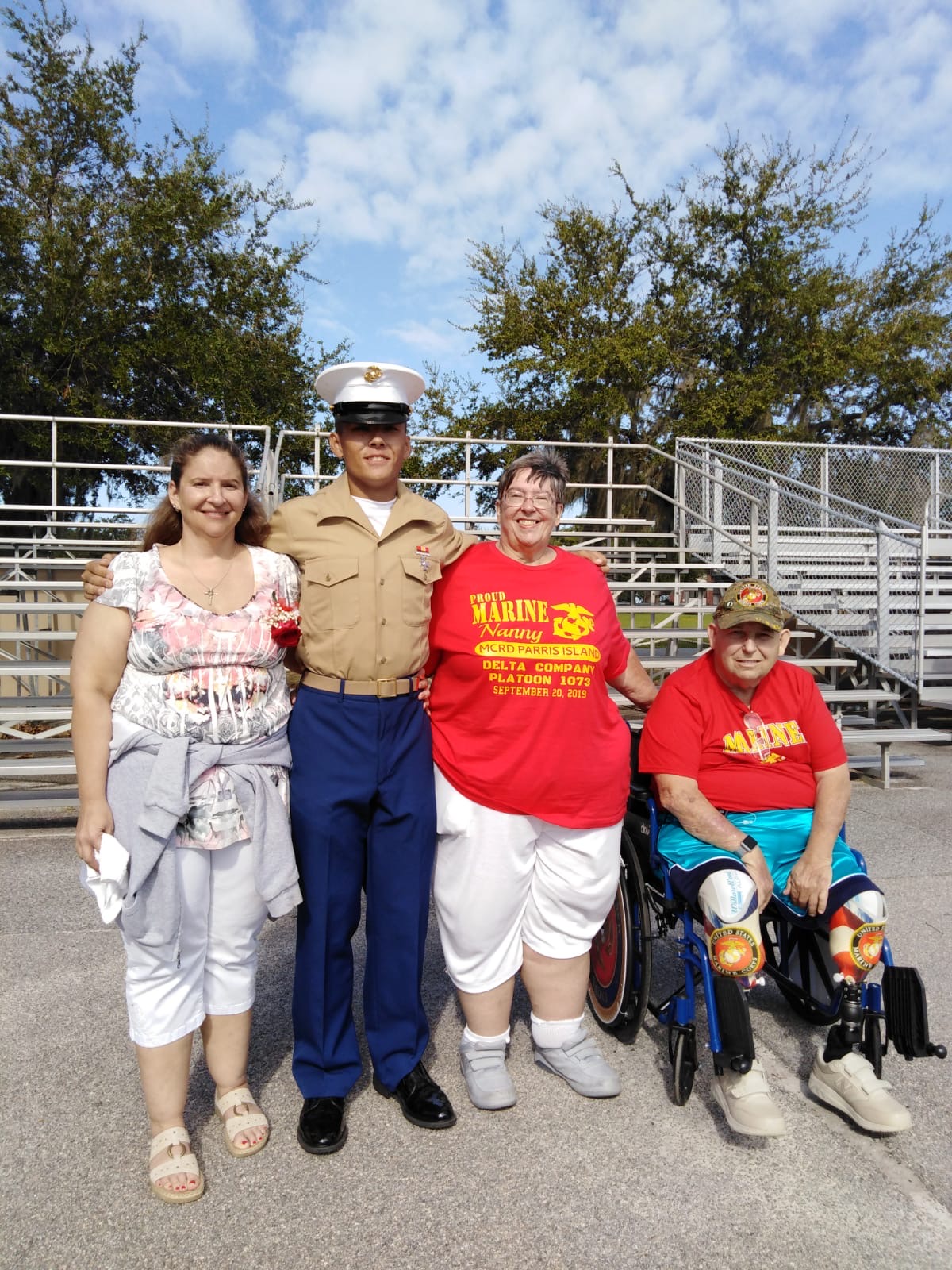 Physical fitness. Two very simple words and yet they encompass so much meaning related to an individual’s life and well-being.  IM ABLE’s Inclusive Fitness Personal Training started as a small initiative to help individuals with disabilities achieve their personal fitness goals as well as to help them lead a happier, more active life. Whether they believe so or not, our adaptive athletes all have something to say about what they have experienced. Tony Petro is one of those hard-working athletes and he sure has a story to tell.

Everyone knows when Tony arrives at the IM ABLE Foundation. He arrives with a following tide of laughter and light-hearted insults aimed at anyone and everyone but Chris Kaag, IM ABLE Foundation’s founder, Executive Director, and fellow USMC veteran, is his favorite target. They trade barbs and laughs before Tony proceeds into the gym to meet Johanna “Jo” Rice. Jo is one of IM ABLE’s Inclusive Fitness personal  trainers. She has about 15 clients and adapts exercise routines to each person’s capabilities. “It is important to help clients form a mindset of ‘I can’ and ‘I will,’” said Jo. “It is not just a choice, but a challenge to always be raising the bar for their own capabilities. Tony Petro is the golden standard of raising that bar.”

“Can’t isn’t in my vocabulary,” said Tony. “I identify the problem, I conquer it, and I move on to the next. There’s a way to overcome any obstacle, if you got the [intestinal fortitude] to do it. I’m nothing special. I just don’t give in.”

Tony Petro had his second leg amputated on October 16, 2016 and has been participating in IM ABLE’s Adaptive Fitness Personal Training ever since. In his 70’s, Tony’s motivation to get fit is so that he can continue to play golf.  “Before the second leg was taken, I came over to IM ABLE and was working with Tim. He had me, are you ready? Running. And not out of fear! I’ve gotten stronger and stronger. I’ve been with Johanna Rice for six months now and it’s been unbelievable. We’ve made tremendous progress. My balance is as good as it’s ever been.”

Tony turned 20 while serving in Vietnam in 1968. He was a Crew Chief on a CH46 assault helicopter. Tony’s time in Vietnam coincided with the high point in the use of aerial herbicides and particularly the infamous defoliant, Agent Orange. Tony and his crew members were exposed every day.

“I enlisted two weeks before I was drafted. I wanted to do aviation. They sent me to mechanic’s school in Memphis. I was there six months, got my orders right before Christmas.  Right into the heart of the beast, Phu Bi, Vietnam. It was right when things were really hot. It was right when the Tet Offensive was getting started. There was a lot of sh** going on between us and the NVA and the Viet Cong, it was a constant battle. As Marines are all first and foremost infantry people. We did everything, I got enough combat experience. I didn’t need any more. But I got more.  It was inevitable.”

“I used to date this girl when we were in school,” said Tony. “I started talking to her again in Vietnam. It was sort of painful because we’d send a letter and it would take a month or six weeks to get delivered. Same thing on the way back. For that time period, that was fast. When I got back, Sandy and I got married and we’ve been married now for 48 years. She’s my rock; we’re still best friends. She’s been really steady for me. Anything we needed to do, we did it together. I started to have the health problems from all the Agent Orange exposure over there and she really got me through everything.”

“They took the big toe first, then they took all the toes,” said Tony. “The pain was just excruciating; morphine didn’t even do anything. I had pretty much given up. I didn’t want to live anymore. Sandy talked to my podiatrist, Dr. Kevin Naugle, and on his own time, he came to talk to me. He’s very good. He sat with me and convinced me that there was only one option, amputate the left leg. He guaranteed that the pain would stop.” It was not easy for Sandy of course. She was a nurse for 41 years at Reading Hospital. “You can deal with anything but when it’s your family, it’s different,” she said. “It’s scarier. You’ve come across this in the hospital, but when it’s your family you feel like you have to take the pain away. I retired when they took the first leg. He had to be driven to all kinds of doctor’s appointments.”

Tony agreed to the surgery and the doctors removed his first leg on January 3rd, 2012. “I drew on all my marine corps training: discipline. You have an objective, you overcome. Sandy was right there with me along the way. She encouraged me.  I didn’t get the prosthetics right away. I was in the rehab for 61 days; I was a sick puppy. They got me to the point where I could stand up and I started to do things. It was almost three months later that I got my prosthetic and three months after that, I was out on the golf course. It meant everything. I am in love with the game of golf.”

“The IM ABLE Foundation has meant everything to me,” Tony said. “They cared enough to want me to succeed. The friendship with Chris has been a Godsend. I got two bikes from them. The first one wasn’t working out and they gave me another. It’s incredible. 54 speeds. It’s not a racing bike, but I’m not into the races. I go to the races, but my goal is to finish one lap. If I can do that, it’s been successful for me.”

Sandy appreciates the change in Tony, “Now that he has his independence, it means he does his thing and I get to have my quiet time at home. I don’t feel like I’m his caregiver anymore. That was the role I played for a while, but not anymore.  He would get frustrated and I would get frustrated. Sometimes we would butt heads. That was a dark time. I get to crochet now. I take care of the house and the grandkids. Before, I would be afraid to leave the house for any amount of time. Now, I have no problem leaving him at home. I just started working out with Johanna too. I gotta do something.  I used to have to take care of Tony. No excuses. Not anymore. Once I came in here and found out it wasn’t intimidating, I’m good. There isn’t a day that I’m here that someone isn’t giving me kudos for what I’m doing.”

As Tony proves every day, “can’t” isn’t in his vocabulary. It has become a culture at IM ABLE to never say never. He has overcome his fears and has surpassed all of the bars he has set for himself, no matter how high they seem. “This is what makes IM ABLE different from other programs, said Jo. “IM ABLE Inclusive Fitness has not just pulled in a population of people, but it has created a unique community of individuals who can lean on each other and push one another to be the best possible versions of themselves. ‘Be Your Best Self’ is a quote my college soccer team used to throw around a lot. When I look at all of my clients, I see them achieving their best self every day that they step foot into the gym. They aren’t doing only doing it for themselves, but their husbands, wives, children, grandchildren, and friends. They have found their ‘why’ and have thrown away any excuse imaginable. So we now turn the attention over to you, what is your ‘why’? There’s no excuses necessary, go out and just move!!!”