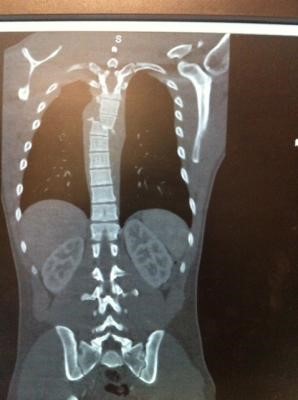 Alan Fisher and his brother and cousin had a cross-country road bike trip planned for September 2016. The route was over 2,250 miles along the southern part of the United States, from the Pacific Ocean east to the Atlantic. This trip wasn’t just out of the blue; the brothers biked together all the time. They were biking one afternoon in April in advance of that trip when Alan hit a patch of gravel.

“We were up in Lewisburg [PA] on Saturday, April 23rd,” explained Alan. “At that point, I’d been riding about four years. My older brother Jon got us all into it. That day, I was riding with my two brothers. We’re going down a steep hill, they were in front, and I was trying to catch up. I hit some gravel and wiped out. My bike hit the guardrail and I went over the handlebars. They heard the crash and it took them a couple of minutes to get back up the hill to me. The first thing I remember after the crash was my brother talking to me. Jon works as a nurse in the ICU and he was all business. I knew what was going on at that point because I couldn’t feel my legs.”

Alan was just 20 years old when he was rushed to the hospital. After realizing the extent of the injury through an MRI, the doctors didn’t waste any time. He was in the operating room the next morning to stabilize his spine, completely severed in between his shoulders. Alan is one of 10 kids, his three brothers plus six sisters. The family basically took over the waiting room while he had two titanium rods screwed onto his spine, one on each side.

After the operation, the medical team encouraged Alan to get active as quickly as possible. “Not even a week later, April 29th, I was in rehab. The main focus was just on balance, sitting in a chair. The first time I got in one, I lost blood pressure and almost passed out. We started small, 5 minutes, 10 minutes, 20 minutes.”  Alan was not one to be held back and pushed too hard too fast. He displaced his collarbone and was set back by a few months.

“So I’m in rehab and Cody just shows up and gives me his number.”

Cody Wills also uses a wheelchair after crashing a four-wheeler while competing in a qualifying race during Motorama 2011 at the Pennsylvania Farm Show. He flipped and landed on his head. Then 20 years old, he crushed the C-6 vertebra in his neck, partially severing his spinal cord. After he recovered, he started a Peer Mentoring program in conjunction with the Hershey Rehab Center. The staff calls Cody when they meet people like Alan and he comes in to show them that a disability is not the end of their lives.

“Cody showed me his car,” said Alan. “That was going through my head the first week, ‘how am I going to drive?’ and Cody cleared that up real quick by showing me the hand controls in his GTO. He also showed me his handcycle. I wanted to go biking with my brothers again, obviously, and Cody showed me that it would be possible. That helped a lot in the process, having a goal. Chris [Kaag] / IM ABLE loaned me a bike for 1 ½ years before I was able to get one through a grant from the Foundation. I ride it as much as I can. I just rode 50 miles for a fundraiser.”

The trip originally planned for September 2016, interrupted by his tragic injury, was clearly postponed. Not by all that much, considering. Alan’s brother and cousin started the trip in January, 2017, heading east without him. Alan drove down with his cousin to meet them in Texas. He rode as much as he could during the day and got in the van when he got tired. “The most I ever did on that trip was 70 miles in one day,” Alan said in such a way that lets you know that this injury wouldn’t be holding him back for long.

Four years later, Cody and Alan are still good friends. “I ride with him a bunch,” said Alan. “He’s sponsored and training for the Paralympic Games in 2024 so I just try to keep up. We’re about to do the Philly marathon together. That’s my kind of route, where you just grind it out.”

Alan also joins Cody at the Hershey Rehab Peer Mentoring program. “The head nurse just calls us up and says ‘hey, there’s someone here who wants to talk to someone.’ and we show them what’s possible.”

For Alan Fisher and his brothers, the goal continues to be the four brothers riding coast to coast together. “I want to do the whole thing. I can get around fine on my chair. I can even change out the tires and go out into the woods since I can’t hike anymore. I just love the feeling of riding.”