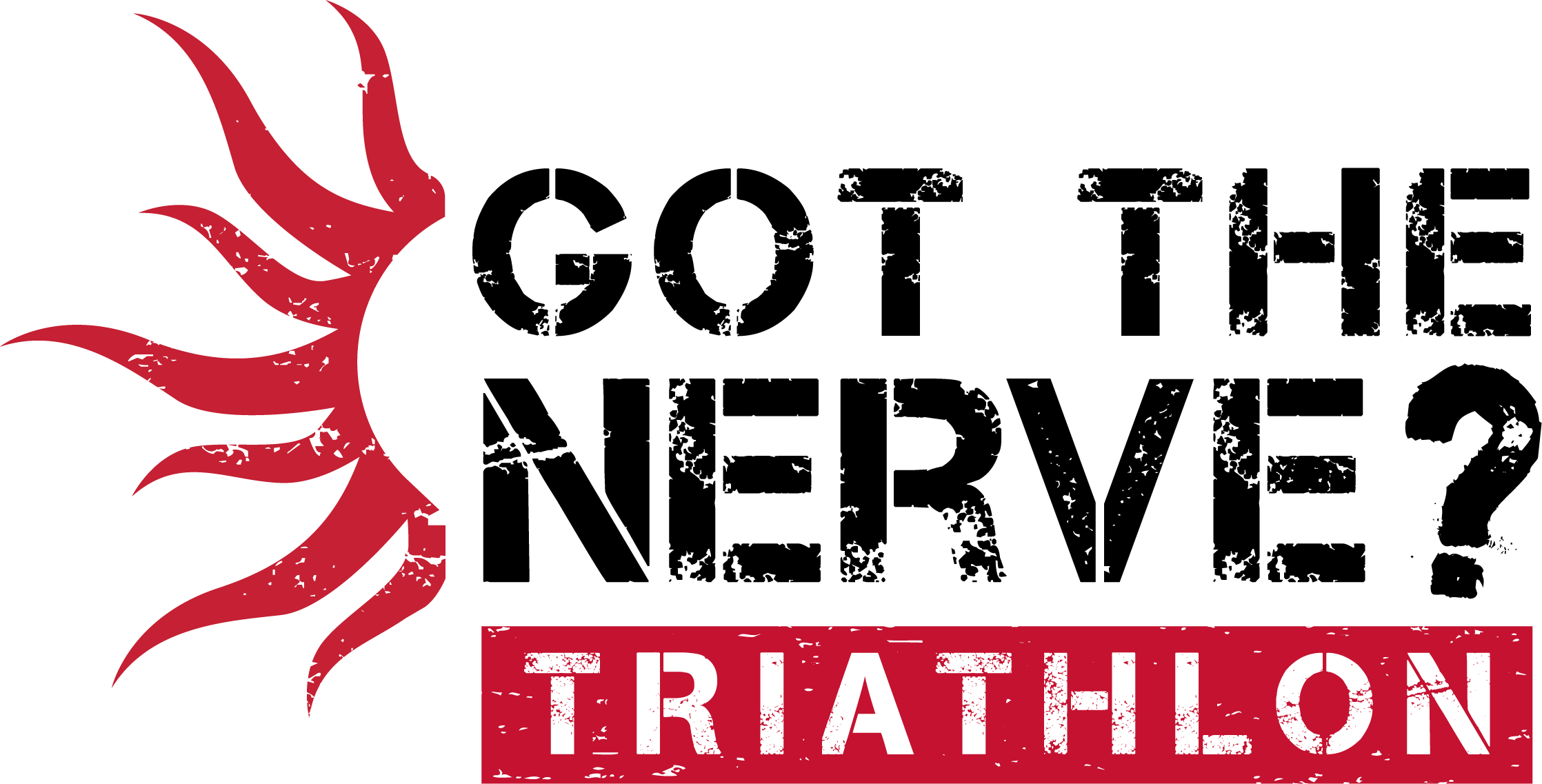 Marathons have an ancient history. Legend is that way back in 490 BC, Philippides ran non-stop from the battlefields of Marathon, Greece back to Athens to announce victory over the Persians.  “We have won!” he said and then immediately fell over dead.

Triathlons, on the other hand are relatively young. The first one was held in San Diego in 1974. The format is the same for all races: swim, bike, then run. The official divisions start with a Sprint Triathlon which is only 0.47 mile swim, short 12 mile bike, and the a mere 3.1 mile run. The famous Ironman Triathlon is an epic 2.4 mile swim, 112 mile bike, and then finishes with a run equal to the one that would be Philippides’ last, 26.22 miles.

Andrew Yoder’s first taste of a triathlon was in the Lancaster County YMCA race before he was even a teenager. For a few years, he participated as a member of a relay team, “but in the fall of 2003, I did my first sprint at the Skylands Triathlon.”  And he was hooked. The next spring, Chris Kaag put on the first Got the Nerve triathlon in Mt. Gretna and Andrew was there. 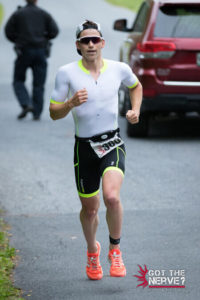 Chis Kaag was a healthy, active US Marine at 21 when he was diagnosed with Adrenomyeloneuropathy, a degenerative nerve disorder that eventually took from him his ability to walk. “I started Got the Nerve in 2004 as a means of raising funds to research the disease in the hope that there could someday be a cure for me and others who live with it, or will someday in the future. We welcome people of all abilities to come and try it out. Over the years, hundreds of people did their first Triathlon in Mt. Gretna, including a bunch of adaptive athletes. Last year, we were especially proud to host the Paratriathlon Regional Championship.”

“I wanted to make sure that funds raised through this race stayed in our community, helping our neighbors, so I started the IM ABLE Foundation in 2007,” continued Chris. “Our mission is to remove obstacles that prevent people in the mid-Atlantic region from getting active, to enable and empower athletes with physical, cognitive, and/or behavioral challenges. Thousands of athletes with challenges of all kinds have redefined what they thought possible, accomplishing feats they never dreamed they could do. Got the Nerve Triathlon makes it possible for the IM ABLE Foundation to provide, throughout the entire year, athletic opportunities to people who would otherwise never have them.”

Athletes of all abilities, including those with physical challenges, are encouraged to participate and are celebrated at Got the Nerve. “From the adaptive athlete’s perspective,” said Andrew, “the triathlon is a sport for all. It’s not about winning but the individual’s personal development.  Got the Nerve will always be a special race to me because of the cause and the opportunity to race with people in my local community. Mt Gretna itself is an awesome venue. I love the grass-roots nature of it. You know the race director. You know a lot of the participants and everyone has friends and family out there supporting.”

“When I originally got into triathlon,” continues Andrew, “I enjoyed to pushing myself. Pushing your limits is highly addictive. I’m competitive so I was motivated to train harder. I wanted to do more; to do better. Even if I had a great result, I always felt there could be improvements. I would wake up at 4AM before school to train and put in the work.”

When Andrew turned 17, he turned pro. “I was racing against the best in the sport and that was a whole new level. I don’t know how many races I’ve done over the years. It’s been 17 years. There are years where I’d do eight or ten, then others, when I had an injury, I’d only be able to do three or four. When I was in my early 20s, I was injury prone. That made my career inconsistent. I’ve learned my limits. Now, I know what I can do. In my 20’s I just pushed it and pushed it.”

Well-seasoned by the age of 25, people began asking Andrew for advice. It started small with one friend. Andrew gave him recommendations about his training schedule and shared race strategy. At that point, he had no interest in coaching but he discovered that he had a talent for it. “I was very fortunate because I’ve had the who’s who in coaches. When I decided to go into coaching, I had absorbed a lot of that. It was innate. I had a lot of authoritarian coaches, ‘my way or the highway’. But as an athlete, I always wanted to have a say in my training and so I incorporate my athlete’s assessments into their training. In 2015, I was injured with a stress fracture in my sacrum and looking at what I wanted to do with my life post racing. I never went to college because I was racing pro. So I started coaching.” 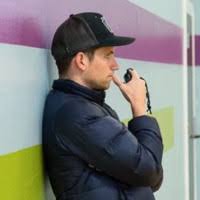 These days Andrew has about 30 local athletes in addition to those he coaches remotely. “The fire still burns. I still want to go out there and push myself but I don’t feel pressure to validate anymore. Coaching is the priority. The way I was competitive in my personal career, I now apply that to my coaching. I take a lot of pride in it. I don’t know any of other way to coach. You’re all in or you’re not.”

Andrew’s athletes have experienced an impressive amount of success. So much that Andrew doesn’t do too much marketing; he lets his athletes’ success speak for itself. In the 2019 Got the Nerve Triathlon, Yoder Performance athletes finished Top 3 in the men’s division and Top 2 in the women’s.

The Navy Vet Triathlete with a Legacy: Rick Poole

Rick Poole was one of the athletes at the top of the podium after he approached Andrew about becoming his coach after Got the Nerve a few years earlier. “I’ve done Got the Nerve five times and won my age group four times and the other time, I was second. The coldest water I’ve ever been in at Mt. Gretna was 58 degrees. That’s enough to give you a popsicle brain freeze. Your body is ok in a wetsuit, your hands and feet are ok, but it takes some getting used to. Got the Nerve focuses on veterans, at least that’s one component. I was in the Navy for nine years so I appreciate what they do, especially for veterans. What they do for disabled vets is particularly moving. I was a non-combatant, Lieutenant, in the Navy Civil Engineer Corp, building roads and infrastructure in Vietnam. I was one of the lucky ones. I lost friends there, I have friends who were badly wounded so I appreciate what IM ABLE does for athletes who have challenges.” 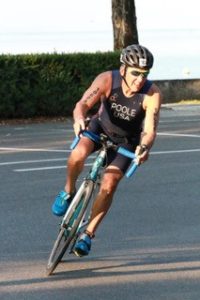 “I’m pretty serious about it now,” said Rick who, unlike Andrew, found triathlon racing at an older age. “I was 68 and my son-in-law dared me to try a Triathlon. I’d never even seen one before. I watched him do one and was pretty impressed. He said ‘Pop, you could do one of these things.’ I said ‘I could probably do all three of those things but not all in one day!’”

Rick also found out that he was pretty good at triathlons. “I started working with Andrew a few years ago. I was 72 and he was 29. My first question to him was if he knew the physiological differences between a 72 year old and a 29 year old. When you get into your 60s and 70s, your body starts cashing checks you write when you’re in your 30s and 40s. He’s been very responsive to my needs. He puts my workout on an app and it has what I’m supposed to do that day. I do what it tells me to do. It tracks what I’m doing from my Garmin and he sees what I’ve done. We correspond and I appreciate that he understands that I’m over 40 years older than he is.”

“He’s enjoyable to coach, said Andrew, “and has a great attitude. He doesn’t necessarily love swimming and that’s where I push him a bit. Even if he doesn’t get faster, he gets better aerobically and that helps in the run and bike and he gets that now. We collaborate. It’s important for Rick to have frequency and then be able to do the next workout. It’s balance. When he goes to Colorado for the winter, he comes into March super fresh, ready to rock. Rick is an extremely motivated, loyal, and committed to the program we’ve developed for him.” 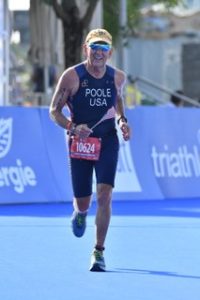 According to Andrew, triathlon training is a very methodical, consistent workload. Year one, people are figuring it out, year two is better, years three and four is when it clicks, “it’s happening,” as Andrew describes it.  “That’s a long time and the secret is that there is no secret. The high performers have nothing to do with speed. It’s about work ethic and Rick certainly has that.”

There’s a comradery and culture amongst the Yoder Performance team. “There are qualities in people that you can tell are going to be good for the team. It’s really important that people I coach can win a race and then spend time chatting with someone who finished in the hundreds. Being fast doesn’t make you a better person. There are expectations for our team that have nothing to do with speed. The people in our group are wonderful people. There are incredible friendships and that’s pretty cool to me, to create a platform where people meet through shared interest and then stay friends outside of it.”

Rick is looking forward to August and September, 2020 when Nationals and Worlds are scheduled. “My daughter, Kelly, is a triathlete too, as is the oldest of her four kids. If this virus gets out of the way, we’ll have three generations of our family competing. 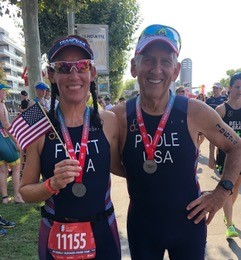 It won’t be his first trip to compete against the best triathletes in the world. “My first Worlds was in Rotterdam. It’s not the Olympics, but when they announce your name representing the United States of America, that is a real thrill. Then there was Australia in 2018.  After that, Lausanne, Switzerland in 2019. That was a nice trip. Having Kelly also competing was really special.  My wife, Beth, and I drove 1,500 miles around France after the race. We went to Normandy where my uncle landed on D-Day and survived. He was an anti-tank gunner in the First Infantry Division. He survived not only that, but then the battle of the Bulge six months later.  Walking in his footsteps was a moving experience”

Andrew is incredibly proud to be part of growing the sport. He’s helping others push their limits, whatever that means for them.

“This sport has given me so much and I want to give that to others,” said Andrew. “The success of the athletes is more fulfilling than any of my own personal results. It’s because, when you’re doing your own thing, you get these massive highs, and then you come down from them and no one cares. With athletes, they trust you and they’re vulnerable so I take my role as coach very seriously. But, I can’t ignite the fire. I see it as them taking ownership of their training and I’m just here to assist. I can build the culture, but the culture all depends on the people who are in it. Everyone needs to respect each other and Rick is very much an important part of our culture.